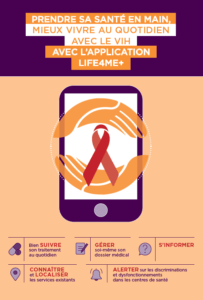 The “right to health” is considered a fundamental right for all. Nevertheless, inequalities in access to care shows that it is far from being a reality for everyone.

Life4me+ : an application to address several needs in the MENA region

In the MENA region where the ACACIAS project is being implemented, these inequalities are particularly pronounced in terms of HIV, particularly among key populations who represent the majority of the population affected by the epidemic in the region. Many of them do not have access to treatment or interrupt medication because of geographical distance, lack of support and assistance (medical and psychosocial), but also because of socio-cultural barriers and discrimination. According to UNAIDS reports, while over the past ten years, many  countries has been able to reduce the number of new HIV infections, they have  increased by 35% in the MENA region over the same period. In this context, providing access to clear, relevant and reliable information on HIV prevention and care is essential for both people exposed to and living with HIV. Today, thanks to the growing use of Internet and mobile phones, especially among young people, digital technologies are proving to be an opportunity to be seized to reduce these inequalities.

“The ACACIAS project was created to address a gap in the HIV response in the MENA Region. There is a lack of information and quality monitoring of people living with HIV. In general, many people in our region do not have reliable information about their treatments or about HIV. “Dani Hanna, M-Coalition Plus, Lebanon, ACACIAS project partner.

Available in 3 languages: French, English and Arabic, this application will enable key populations and people living with HIV to follow their daily treatments, configure medication reminders, manage their own medical records, and learn about the disease, its prevention and care. The application will also allow users to locate existing services around them and alert about discrimination and dysfunctions in health centres. The project also aims to play a role in strengthening the civil society and support advocacy for the defence of HIV Infected or affected people's rights.

“The application will allow us to reach people living with HIV that we are unable to reach today. It will also propose a mapping of friendly centres for LGBT people, drug users, sex workers” Dani Hanna, M-Coalition Plus, Lebanon, partner of the ACACIAS project