On December 2014 the 3rd, with the participation of Prime Minister Mohamed Said Fofana and other members of the government were inaugurated the 2 laboratories of the OPP-ERA Project, equipped with open polyvalent platforms, and in which more than 2,000 viral loads have already been realised.

We thank our partners who support us in this project: UNITAID, the Bettencourt Schueller Foundation and the City of Paris. 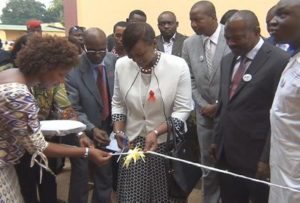 Focus on the OPP-ERA Project

The use of the HIV Viral Load Test (VLT) is necessary to ensure prescription of the most suitable treatment. Because of its high cost, access to this test is still under-developed in West African public structures.

The launch of OPP-ERA project aims at opening the market for viral load tests to the competitive marketplace, thereby combatting overpricing and encouraging technological innovations by privileging the “Open Polyvalent Platforms” model. By this way, OPP-ERA enhances a better access to viral load tests through price reduction for people living with HIV.

Funded by UNITAID, OPP-ERA project is co-funded and implemented by a consortium of French partners (FEI, ANRS, ESTHER, Sidaction and Solthis) in 4 countries since March 2013: Burundi, Cameroun, Ivory Coast and Guinea..

Solthis is the project partner in Guinea where 2 laboratories have been equipped with open platforms in Conakry. For more than a month, Solthis already conducts 80 viral loads per week:

Between 2013 and the beginning of 2014, 2 lab technicians were trained to the use of viral loads counters machines, in France and in Abidjan. The machines and reagents were set up in July 2014. The first viral loads started from mid August, with an average of 80 viral loads conducted in each laboratory per week.

Solthis has previously trained the health workers to the use of the viral load tests so that they could prescribe the test and use the results to detect any therapeutic failures.

Solthis will continue to give support to the laboratory and medical professionals in order to consolidate the knowledge of this first phase of the project. In the second phase, there will be an expansion of access to equipment for the monitoring of HIV+ patients in the Boke region and to the use of the test to the early diagnosis of HIV-exposed newborns, and to the tuberculosis diagnosis.

Funded by UNITAID, the project is implemented and cofounded by a consortium of French partners: France Expertise Internationale (FEI, coordinator), Network for Therapeutic Solidarity in Hospitals (ESTHER), The French National Agency for Research on AIDS and Viral Hepatitis ANRS), SIDACTION and Therapeutic Solidarity & Initiatives against HIV/AIDS (SOLTHIS) OPP-ERA was launched on 1 March 2013 and is currently being carried out in four countries: Burundi, Cameroon, Cote d'Ivoire and Guinea. However, the project aims for a market impact covering a broader geographic area, through adoption of the OPP model by other resource limited countries.