Louis Pizarro, CEO of Solthis, intervened during the round table dedicated to the place of la Francophonie in global health issues 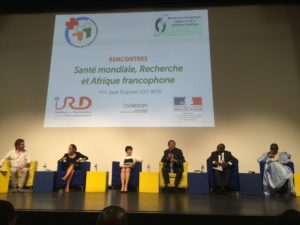 The Ivorian and French governments, with the support of French research organizations, members of the Alliance for Life and Health Sciences (AVIESAN), organized  on January 18th  and 19th, 2017, two days conference, in Ivory Coast, on research in African French-speaking countries and its contribution to global health (more information : Press release – Abidjan hosts the PACCI Scientific Days).

Louis Pizarro, CEO of Solthis,attended the first day of the conference (19th November) organized by the Research Institute for Development (IRD-France) together with the French Ministry of Foreign Affairs and International Development.

He intervened in the round table  discussion dedicated to the place of la francophonie in global health. He stressed on the importance of developing research groups / NGOs in order to enable francophone actors to play a greater role in the  global health governance . He highlighted two challenges facing the French-speaking world

Agenda of the conference “Global Health, Research and Francophone Africa”
January 18th :  scientific day organized by PACCI, with the support of the National Agency for Research on AIDS and Viral Hepatitis (ANRS-Inserm, France)

January 19th : The Research Institute for Development (IRD, France) together with the Ministry of Foreign Affairs and International Development (MAEDI, France) organize a high-level meeting on health and scientific diplomacy in French-speaking Africa