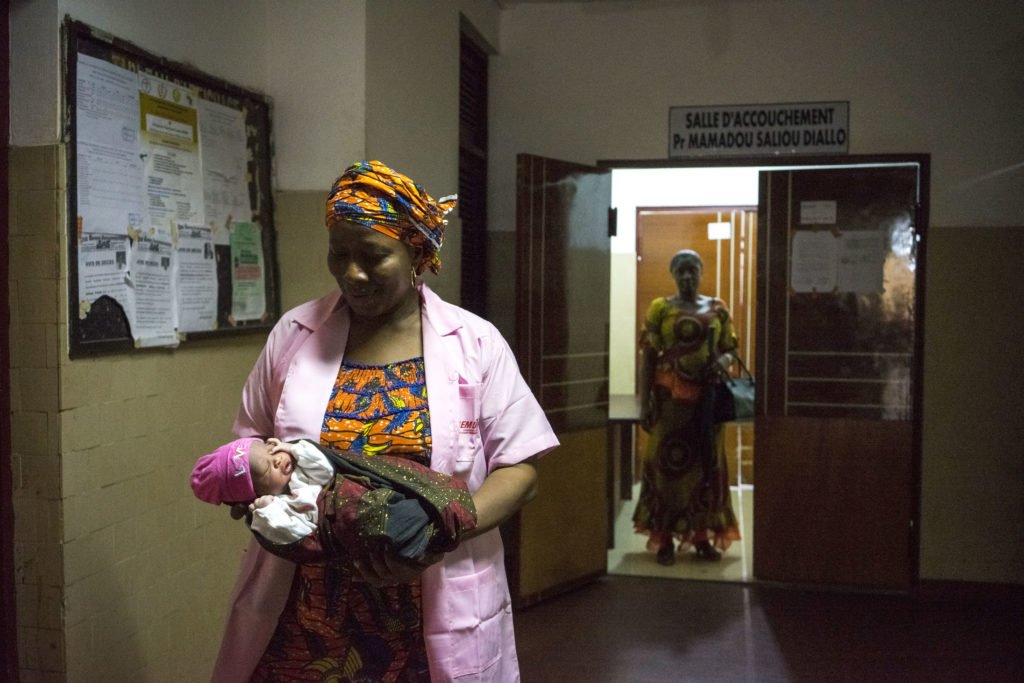 Conakry, Guinea, October 8, 2019. The  Operational Research Project ANRS 12344- DIAVINA, implemented in Guinea since 2017 by Solthis in partnership with PNLSH (the National Programme for the Fight against AIDS and Hepatitis) and FEG, the association Federation Espoir Guinée and thanks to the financial support of ANRS and the Paris City Hall, ends on Tuesday 8 October 2019 in Conakry.

Despite progress in preventing mother-to-child transmission of HIV (PMTCT), 180,000 children are still infected each year worldwide. 90% of them are born in sub-Saharan Africa and 37% in West and Central Africa, where HIV prevalence  is much lower than in Eastern or Southern Africa,  reflecting therefore the delay in PMTCT programmes. Indeed, less than half of pregnant women living with HIV are put under antiretroviral drugs during pregnancy in West and Central Africa, compared to more than 90% of women in Eastern and Southern Africa.

Undiagnosed, 50% of children born with HIV die before the age of 2 years. Preventing mother-to-child HIV transmission and initiating early treatment for HIV infected children before the age of 2 months is therefore essential. As recommended by WHO,  this includes systematic HIV testing of pregnant women, the use of preventive treatment appropriate to the risk of transmission, and early diagnosis of children born from mothers living with HIV.

In Guinea, despite significant decentralization of  mother-to-child HIV transmission prevention and care, and the integration of WHO  recommendations  into the national health system: only 37% of pregnant women and 66% of those checked in antenatal care have receive HIV testing during their pregnancy. Only 11% of exposed newborns are early diagnosed  and 39% of children who are diagnosed as infected are only put on treatment.

The main objective of this project was to screen women in the birth room and demonstrate the feasibility of a strategy combining enhanced prophylaxis and diagnosis at birth for children at high risk of mother-to-child transmission of HIV. This project, thanks to the involvement of Ignace Deen’s maternity midwives, increased HIV testing of women in the workplace by one-third and achieved a 95% screening rate.

The project also demonstrated the feasibility of the tested strategy as 81% of newborns were able to benefit from a birth sample and enhanced prophylaxis for 12 weeks. The project also showed that more than 1/3 of children exposed to HIV were at high risk of HIV transmission and needed enhanced prophylaxis, justifying the scaling up at the national level of this strategy recommended by WHO.

Beyond the medical aspects: the burden of stigmatization

This study also showed some contextual limitations that should be the areas of improvement on which to work in the future.

The strong stigmatization that persists against people living with HIV leads many women to hide their status: half of the mothers identified as high-risk did not report their HIV status or the use of ARVs to caregivers during birth room screening. Their children were therefore wrongly identified as being at high risk, leading to unnecessarily long periods of preventive treatment.

Moreover, stigma also greatly increases the risk that high-risk children will be “lost to follow-up”, i.e. they will not return for further consultation and will not receive the treatment and diagnostic tests they need most: one third of the children in the study were unable to benefit from enhanced preventive treatment and almost half were lost to follow-up before the age of 18 months, despite the constant support provided by community and medical teams.

Overall, this project confirms the need for the WHO recommendations to be implemented at the scale of WHO recommendations to improve the prevention of mother-to-child transmission of HIV, but shows that in addition to medical approaches, addressing the social issues of stigmatization is an essential necessity.