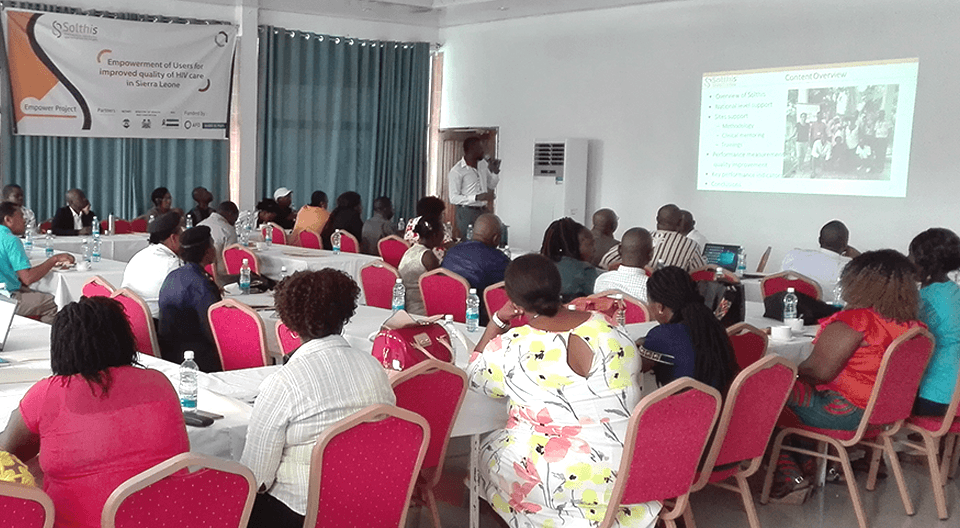 On the 6th of February, Solthis Sierra Leone organized its 2nd annual workshop to engage with stakeholders of the Empower Project and to showcase the results achieved.  Participants covered a wide array of organisations from people living with HIV, international and national NGOs, civil society groups, Ministry of health, district health management teams, UN agencies (UNICEF, UNAIDS) who attended and made valuable contributions to the workshop.

Empower: a contribution to UNAIDS 90-90-90 achievement in Sierra Leone

The event also allowed Solthis to brainstorm with key partners on the 3rd and last year of implementation with regards to sustainability and project endurance. Co-funded by the AFD, the City of Paris and the National HIV/AIDS Control Programme, the project” Empower” started in January 2016 for 3 years and aims at improving the quality of cares for People living with HIV (PLHIV) in Sierra Leone. The project includes capacity building components for both PLHIV and health professionals as well as an institutional support component.

“ Solthis has truly helped us to improve our knowledge and our practices, thanks to the training and the clinical mentoring sessions given by its team” Mariama Sheriff, HIV Nurse counselor, Lumley Governement Hospital.

The audience generally expressed genuine appreciation to Solthis Sierra Leone for the commitment and continuous support provided at national level, facility level as well as community level. The joint cooperation between these levels, especially the medical component and the community component, core aspect of the project, was seen as an important strategy for achieving the UNAIDS 90-90-90 in Sierra Leone.

On December 31, 2017, the number of patients under antiretroviral treatment in health facilities supported by Solthis was 6971, i.e., 29% of HIV infected patients supported in Sierra Leone

Read more about the Project Empower