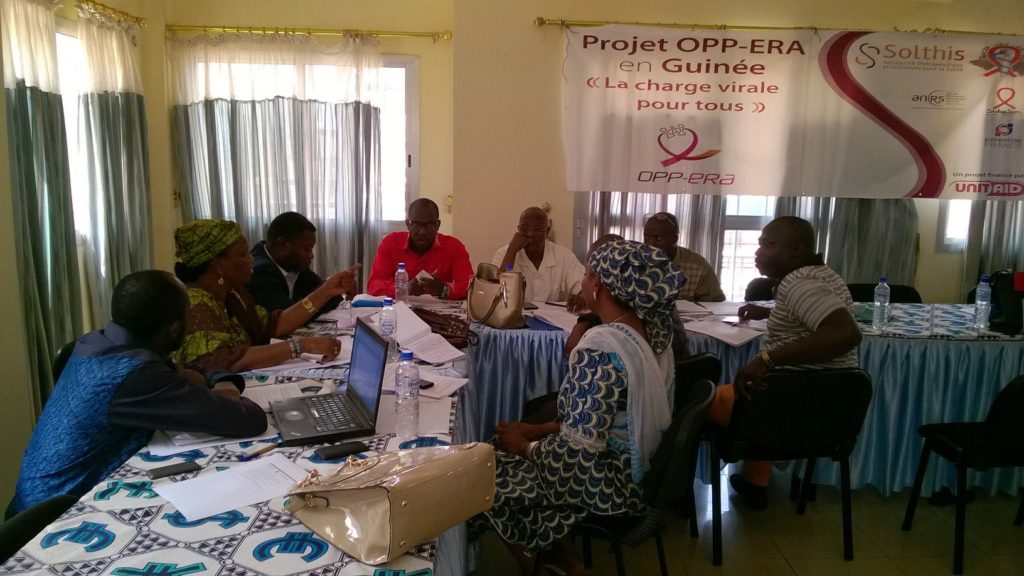 Solthis, in partnership with Guinea National Program for Health Care and Prevention ( PNPCSP) held a workshop in Conakry from 14 to 16 February 2017 to reinforce the HIV viral load demand strategy in Guinea. The workshop was attended by 30 participants from CNLS (National AIDS Committee), PNPCSP, UNAIDS, MSF, HIV treatment centers, laboratories and associations  of people living with HIV.

Access to viral load tests for HIV-infected patients is one of the major challenges in the fight against AIDS in resource-limited countries. Challenges lie both in the development of supply ( i.e., equipping laboratories to improve access to testing and in training health workers), and in stimulating demand for which clinicians and patients role is paramount. Clinicians should prescribe viral load tests to patients in need, interpret the results and adapt the medication if necessary. Besides, patients should be actors of their own health by requesting access to viral load tests.

An assessment of  the  demand and supply  for  viral load measurement in  health centers,  partners  of OPP-ERA in Guinea,  was carried out by the Solthis team from 12 December 2016 to 24 January 2017 to identify the demand and supply strengths, weaknesses, opportunities and threats.

The workshop enabled partners to :

This workshop is part of OPP-ERA phase 2 implementation which contributes to facilitating the achievement in Guinea by 2020 of the UNAIDS 90-90-90 last objective.

The OPP-ERA project aims to improve  virological  monitoring of people living with HIV/AIDS through the development of free access to viral load (CV)tests. Furthermore, OPP-ERA seeks to  open the market of viral load technologies to new suppliers through the promotion of the  “Open Polyvalent Platforms (OPP)” model, and thus to widen access to cost-effective viral load tests in West and Central Africa.

Funded by UNITAID and implemented by a consortium of French partners: Solthis (lead coordinator), ANRS, Expertise France and Sidaction, the project was launched in March 2013 in four countries: Burundi, Cameroon, Côte d’Ivoire and Guinea. It is being extended for a further three-year phase in these four countries in order to expand access to viral load tests on a wider scale and develop the platforms polyvalence.