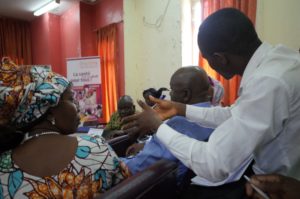 Solthis, in collaboration with the National Programme against HIV (PNPCSP), organized a workshop to share the results and prospects of the OPP-ERA project, a project to improve access to viral load in Guinea. It was held in Conakry on March 23 and 24 2016, in the presence of Professor Christine Rouzioux (ANRS).

The OPP-ERA project, implemented by Solthis in Guinea, has introduced for the first time free access to viral load in Guinea’s public health system and its access was maintained during the Ebola crisis.

To date in Guinea, more than 5,000 patients on antiretroviral treatment have benefited from a measure of HIV viral load and ¾ of these patients are in treatment success.

A hundred persons attended this interactive workshop led by Solthis and its national partners.

The exchanges between clinicians, patients, laboratory technologists and institutionals allowed to identify improvements’ possibilities to further enhance the prescription of viral load, which is a critical monitoring for patients under antiretroviral treatment. The workshop also addressed the practical use of this viral load tests: results’ interpretation and decision to strengthen the compliance and / or adaptation of the treatment.

This workshop has been the opportunity both to show promising early results of this project but also to identify the improvements that will allow more patients to benefit from this test, particularly in the context of the decentralization of HIV management  in Guinea.

The OPP-ERA project aims to improve monitoring of people living with HIV through free access to viral load (VL) and diagnosis of infants. It also aims to open the new VL technology market to providers through the model of “Open Polyvalent Platforms (OPP),” and thus reduce the cost of test and increase its access for infected patients.

Financed by UNITAID, the OPP-ERA project is co-financed and implemented by a consortium of French partners – Expertise France, ANRS, Sidaction and Solthis – in 4 countries: Burundi, Cameroon, Cote d’Ivoire and Guinea since March 2013.

The media talk about it