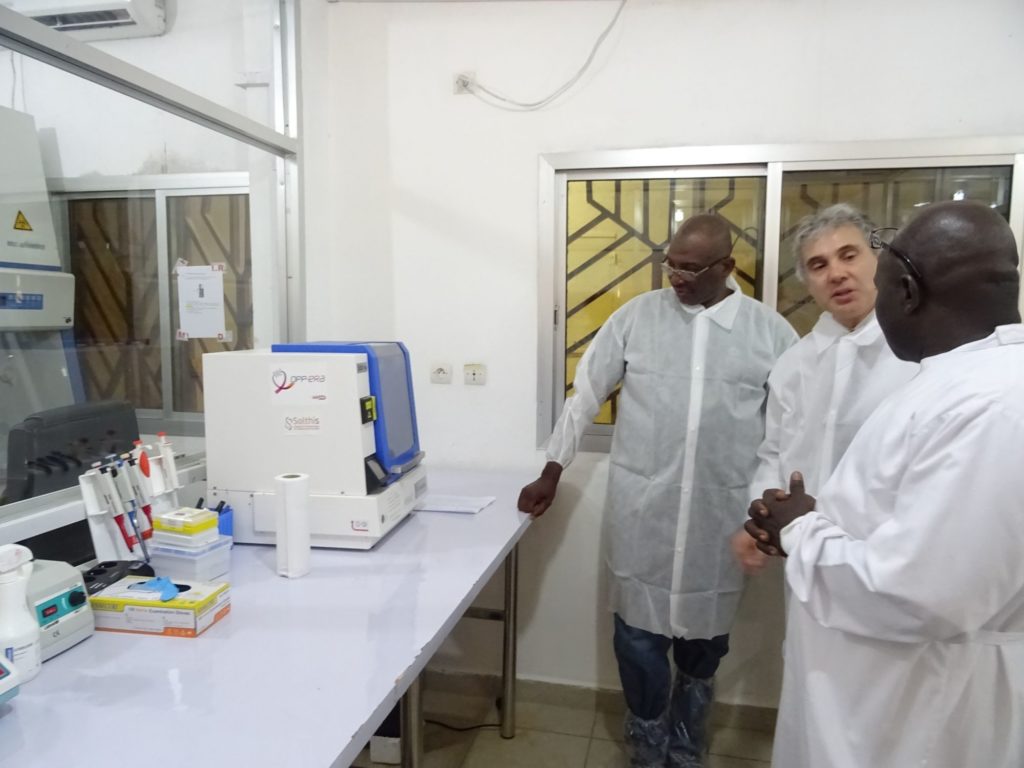 Headed by its Africa Director Yazid BENSAID, the delegation comprised  AFD Executive Officer Counsellor, AFD Desk officer and   AFD Head of Mission in Guinea. The meeting was attended by Dr Koita, Executive Director of the National Program for Health Care and Prevention of STI / HIV / AIDS, Prof. Cissé, Deputy Director of the Donka National Hospital, Association of PHAs “Fondation Espoir Guinée (FEG)” in charge of the psychosocial care of PLHIV at Donka hospital and Solthis Head of Mission as well as the OPP-ERA Project Manager in Guinea.

Throughout exchanges and a guided visit of the laboratory, the AFD delegation was presented the main achievements of OPP-ERA in Guinea. The project allowed access for the first time to free viral load for patients in the national public health system. The main purpose of the project’ second phase , which started in August 2016, is to decentralize access to these tests in Kankan and  to ensure  polyvalence of the  platforms in order to be able carry out other examinations than HIV  viral load : so for example tuberculosis and  newborns early HIV diagnosis .

The meeting was also an opportunity to discuss the contribution of  PACTES ( Patients Centered Treatment and Health care),  co-financed by AFD and UNITAID, in terms of community mobilization for access to better quality care, promotion of users’ rights and enhancing dialogue between patients and caregivers. This project will be implemented by Solthis in partnership with the Ministry of Health, PLHIV Associations / networks, HIV health care centers and molecular biology laboratories.

Read more about the OPP-ERA Project

Funded by UNITAID and implemented by a consortium of partners: Solthis, ANRS, Expertise France and Sidaction, the OPP-ERA project was launched in March 2013 in Burundi, Cameroon, Côte d’Ivoire and Guinea. The project aims to improve cost-effective monitoring of people living with HIV by increasing   access to HIV viral load tests and availability of open polyvalent platforms (OPP), innovative molecular biology based technology  that can measure  HIV viral load and diagnose other infectious diseases such as tuberculosis. The machines used are suitable for central and decentralized laboratories.
In Guinea, its first phase  demontrated more than 12,000 HIV viral loads tests between August 2014 and November 2016.