In 2009, Solthis provided technical assistance and support for the decentralization of HIV/AIDS care. Despite administrative issues that caused the program to end in 2010, Solthis helped improve screening operations in three regions of the country.

In 2008, Burundian institutions asked Solthis to provide technical assistance and support for the decentralization of HIV care.

2009: After two exploratory missions, the Solthis program in Burundi began in March 2009. A team consisting of a Project Manager, a Medical Coordinator, and an Administrative and Finance Manager began operations in Bujumbura.

Initially, the program's goal was to support the decentralization of the Gitega province and then the Ngozi province. Beginning in 2009, delays in obtaining approvals hindered the mission.

End of the program in 2010 due to administrative authorization issues

Solthis's program in Burundi faced administrative authorization issues that led to its demise in October 2010.

This is a source of much regret for Solthis, especially considering that all of the technical partnerships formed since the first exploratory mission in February 2008 with parties involved in HIV prevention were successful.

Highlights of Solthis operations in Burundi

Support for decentralization of care

Introduction of a health information system 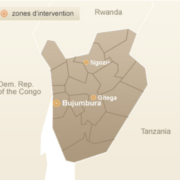 Our presentations at IAS 2017