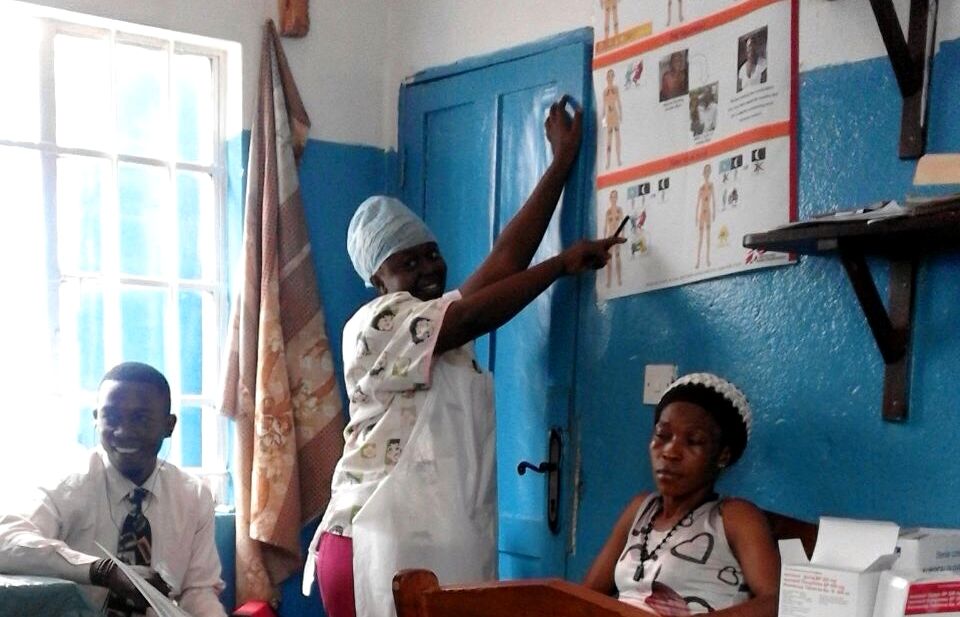 Since 2004, Solthis, aware of the issues of observance and adherence to treatment and care in the management of people living with HIV (PLWHA), has been developing activities for patients supporting their observance and adherence to treatment in the countries in which it operates. These activities take many forms in order to meet the global needs (pathophysiological, spiritual, psychological, emotional and social) of patients: therapeutic education, psychosocial support, and psychological care. In this way, Solthis assists in particular with the development of the Therapeutic Patient Education programme in some countries.

After more than 10 years of work on this issue in Africa, both in health organisations and at an institutional level, Solthis has at its disposal a real expertise and analysis on TPE and on its integration into health systems with limited resources.

The key features of Solthis’ work on TPE

By implementing a capacity-building strategy, Solthis and its partners have developed TPE in several countries of intervention. Work was conducted, when possible, in health facilities concerning 4 points required in order to effectively achieve the activity: that human resources have the skills to carry out the activity (through training and close mentoring), that they have the necessary equipment (in the case of TPE, picture flip charts and patient records), that the activity is organised within the health organisations, and finally that the institutional surroundings allow this activity and its organisation with the practical reference documents. For this final point, Solthis made an appeal at an institutional level to include support activities for patients in the most basic care package offered, including TPE when conditions were conducive to the deployment of such an activity.

Moreover, as with any public health intervention, Solthis believed that the establishment of TPE should be evaluated and put into perspective. So for its most advanced TPE program, in Niger, Solthis conducted an external evaluation of the programme and a study of socio-anthropology in collaboration with LASDEL, a laboratory of socio-anthropology.

Focus on TPE activities in Niger, Mali, Madagascar and Guinea

A pioneer on this topic in Niger, Solthis began work on TPE in 2004 and has developed its programme in close collaboration with l’Unité de Lutte Sectorielle Sida of the Ministry of Public Health and with the support of the association Format Santé. This TPE programme is the most comprehensive for Solthis, allowing the integration of this activity into a broader reflection on public health, so that the majority of patients can benefit from TPE, including those in decentralised areas (Project CASSIS, 2012-2016, Initiative 5%).

Solthis started its TPE programme in 2004 in partnership with Format Santé as part of their program strengthening health organisations for the management of HIV/AIDS in the Ségou region and then in the Mopti region from 2010.

This programme happens mainly through training, mentoring, and organisational support for the implementation of TPE activities in healthcare organisations.

At an institutional level, Solthis works closely with the Regional Department for Health in order to run these activities. At a national level, in 2010 Solthis created an inventory of experiences and tools for TPE in Mali leading to the drawing up of a reference document on TPE that is due to be published in the upcoming Global Fund financing plans, and of which Solthis has been identified as a specialist partner.

Solthis began its intervention in Madagascar in 2006, before which no TPE activity had existed. Patient associations offered some support activities but they were not widespread. To raise the issue of patient care, the overall support for non-biomedical aspects, and to identify local solutions, Solthis led 2 workshops in 2008 in Diego Suarez and CHU Befelatanana in Antananarivo, joining community figures and hospital workers in Antananarivo and Diego Suarez. These workshops were an opportunity to introduce participants to TPE, to get to know the various figures, and to put in place a framework for exchanges between them.

Following this work, Solthis shared the results of the experiment and made a plea to the Ministry for Public Health for support activities for patients who are expected in care organisations, which the Department did a few years later.

Solthis began its intervention in Guinea in 2008. Although compliance concerns are just as considerable as in other countries, the conditions are not favourable to scaling up TPE, so Solthis does not wish to impose the model.

However to raise awareness about this issue and to create solutions within medical institutions involved in the management of HIV AIDS, in 2011 and 2012 Solthis conducted a study on patients’ basic knowledge of HIV AIDS at the Donka hospital and organised a participatory workshop to share the results and bring all parties together in a reflection upon the implementation of support activities for patients, even if they didn't really correspond to TPE.

Furthermore, at an institutional level, Solthis made a plea for the integration of this activity into the package of essential services of HIV care and to mobilise funding from the Global Fund.

This English translation has been possible thanks to the PerMondo project: Free translation of website and documents for non-profit organisations. A project managed by Mondo Agit. Translator: Lottie Valks. Proofreader: Hannah Wallis.

The application LIFE4ME+ is being extended to the MENA REGION

Sierra-Leone : Awareness-raising for HIV patients on the importance of properly taking ARV treatments